Network4Cars has a rich history in the international car trade

In 2007 Network4Cars ended the broker role and started owning and delivering all cars from its own compounds. In 2011 the company relocated to a new and bigger facility in Nieuw-Vennep, near Amsterdam. Since 2015 Network4Cars has expanded and now has offices in several European countries.

In 2016 the company spread outside Europe and invested in digitalization and automation, making buying and selling cars easier.

Based on the developments in the market today, Network4Cars buys and sells new, nearly new, and used cars. The benefit for our customers is presenting the right offerings, at competitive prices, and with high reliability.

Sales of LHD cars and expansion of activities to Germany

Expanding activities to the whole of Europe

No more brokerage! Network4Cars owns and delivers all cars from its own compounds

Growing further Network4Cars moves to a new office and compound location in Nieuw-Vennep, close to Amsterdam

Make sure you don't miss our stock updates!

Sign up for our weekly update including NEW STOCK, SPECIAL DEALS and more… 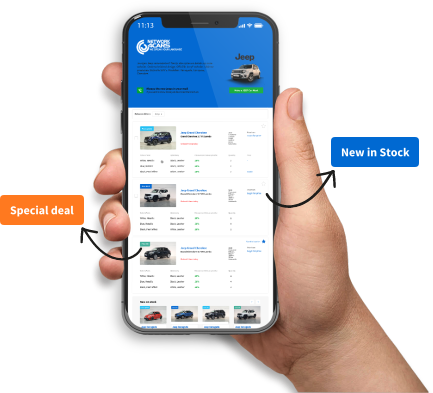